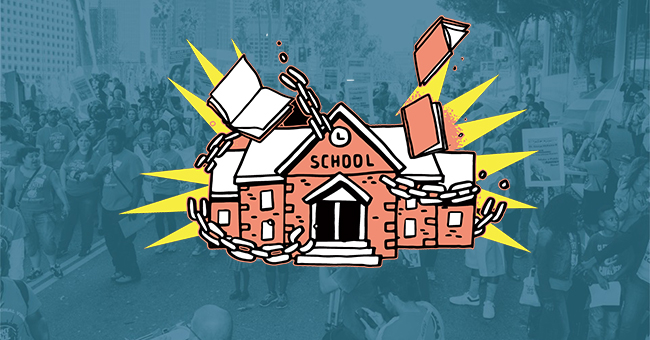 Students of color and their parents, community organizers, and educators have been fighting systemic racism in schools by creating a new intersectional educational justice movement. Their movement also addresses immigration, LGBTQ rights, labor rights, and the school-to-prison pipeline. Their stories of resistance are collected in Lift Us Up, Don’t Push Us Out!: Voices from the Front Lines of the Educational Justice Movement. Written by Mark Warren with David Goodman, Lift Us Up! will outrage, inform, and mobilize parents, educators, and concerned citizens about what is wrong in American schools today and how activists are fighting for and achieving change. Our blog editor Christian Coleman caught up with Warren and three of the contributors to the book—Jitu Brown, Zakiya Sankara-Jabar, and Jonathan Stith—to ask about the inspiration behind the collection and more. This is the first part of the roundtable post. Stay tuned for part two.

Christian Coleman: Why did you feel it was important to put this book together?

Mark Warren: I’ve been working, studying, and working with community organizing groups, working with parents and youth of color and communities, low-income communities across the country, for many years. I felt the work that parents and young people in communities are doing to fight for educational equity and justice was important. Over the past ten years or so, I saw that local organizing groups were now coming together in new ways to form much more of a larger movement for educational justice. This movement was often led by people of color, as are represented in the book, but that most people don’t know about this movement, and in many ways, different parts of the movement aren’t always as connected to each other as they could be. Putting this book together was a chance to work with amazing organizers, education activists, and other kinds of movement builders to help them tell their stories of how they’re working to build a movement, present some of their hard analysis of systemic racism in our schools, lift up successful strategies they’ve been using, and organizing efforts, and tell these stories and bring this out to a national audience. It was also the opportunity for different parts of the movement to be represented all together in one book. We have organizers, teacher activists, teachers from other movements like the LGBTQ movement, who are working with youth of color, LGBTQ youth of color, and others to build a new movement for educational justice. I feel that this movement has to be brought to light so that people can understand why we need a movement led by people of color to really fight for educational equity and justice in this country.

Jitu Brown:  I think Mark has done excellent work in the past, helping to shine light on work that people have done for educational justice. I think there’s a level of trust for who the messenger would be. There’s an old proverb that says, “Until lions have their own historians, the story of the hunt will be told by the hunter.” I think it’s really important to take every opportunity to share what the state of public education looks like through our lens. Often, people make policy systems based on racist assumptions and opinions of other groups, as opposed to people’s real-lived experience. I think that’s really the reason I feel it’s important to make sure we’re taking every opportunity to share our perspective and to put our worldview out in the public.

Zakiya Sankara-Jabar: I felt it was important to contribute a story, particularly from black parents’ perspective. For me, I came to this work really organically, responding to my son at the time who was being pushed out of preschool. Just as a response, pushing back, not accepting the narrative that the school system was providing regarding my son, asking questions, but not only that, taking it a step further to engage other black parents in that same space, to ask them the same question, “Are you having this experience?” When I realized that it wasn’t just me and this was much bigger and had been happening for decades in this country, I felt the need to start an organization to continue to organize our particular community, the parents, to push back on the cradle-to-prison pipeline, and make sure that black parents knew they had a voice, that they had a right to speak up, that they had a right to ask questions, and that they had a right not accept what the school system was saying about our children.

Jonathan Stith: I think it was important to tell the story of young people, particularly black and brown youth, and what they’ve been experiencing in their schools, and how they have sought to organize themselves to fight for assistance to reach the highest level in influencing federal policy. This felt like the moment to document our struggle up to this point so that we can learn from it and so that others can learn from it as well. The book harvests the fruits of about a decade—maybe a decade and a half—of education organizing.

No Comments on "Lift Us Up, Don’t Push Us Out!: A New Intersectional Educational Justice Movement — Part I"

Latest News From the Web

Read the original article from the original source Nine-year old McKenzie Adams was “a real sweet girl,” a “straight-A student” who wanted to be a...More

Read the original article from the original source   First-generation college students are less likely than their peers whose parents graduated from college to have...More

Teachers of the world, unite. You have nothing to lose but your pain!

Read the original article from the original source (Photo by Scott Olson/Getty Images) Imagine you’re a mother whose husband has just left you and your...More

Read the original article from the original source Dear Mike Kirst, Thanks for hiring me as your Consortium for Policy Research in Education (CPRE) Research...More